Off SoHo Suites offers a blend of the exotic charm of Little Italy, SoHo and the East Village, along with the hip swagger of the trendy Bowery. Close enough to the Financial District, Chinatown and Greenwich Village, enjoy handsome suites with hardwo... more

Off SoHo Suites offers a blend of the exotic charm of Little Italy, SoHo and the East Village, along with the hip swagger of the trendy Bowery. Close enough to the Financial District, Chinatown and Greenwich Village, enjoy handsome suites with hardwood floors and fully-equipped kitchens. With 24-hour concierge service, free fitness facilities and room service, the Off SoHo Suites Cafe additionally serves breakfast and lunch daily. For 15 years this has been a downtown destination of choice for discerning guests who enjoy the proximity of hip downtown locales as well as kitchen facilities right in their suite. Breakfast is included, and the well-respected German restaurant Loreley is right next door.

Cons:
The aircon in bedroom was very loud and noisy. One of the ceiling light metal rim fell and almost hit our head. Clothes hanger was faulty and housekeeping didn't fix it. Housekeeping kept giving us big bottles of hair conditioners and small tubes of random brand shampoos. Bathroom window had a missing window blind panel, we had to put a cereal box cover to block the opening. Hope the property will look into all these.

Will stay here again if the aircon are fixed and does not make loud noises.
« less 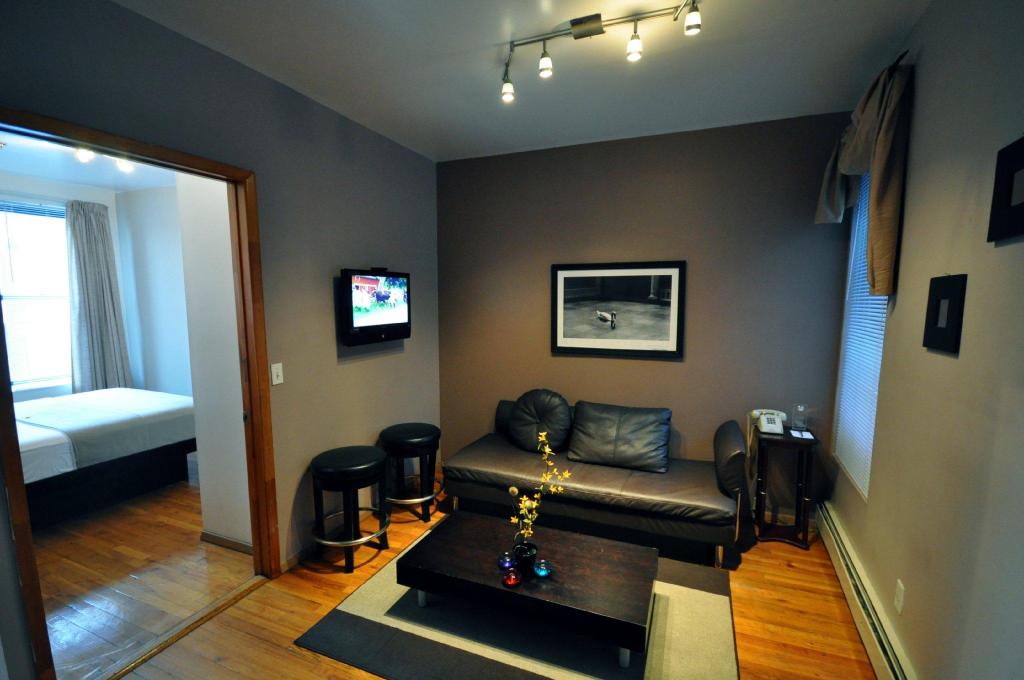 Off Soho Suites Hotel is located in the East Village neighborhood of Manhattan. Long before the musical "Rent" brought in legions of pierced, tattooed teenagers from every corner of America (and drove up the rents), the East Village was an eclectic mix of elderly Ukranians and Poles, Dominican and Puerto Rican families, and assorted artists, wanna-be bohemians, punks, their followers, lovers and friends. (Did we leave anyone out?) Largely gone are the heroin dealers, all night parties, punk music extravaganzas and infamous Bagel Tree of the 1980s and early 1990s, but the real landmarks remain, including the Joseph Papp Public Theater, Tompkins Square Park, and Cooper Union. The Public offers some of New York’s finest Off-Broadway Theater as well as Joe’s Pub, with a diverse variety of live shows. Beautiful Tompkins Square Park offers something for everyone, including dog runs, basketball courts, a weekly market, outdoor music events, and occasionally local characters chatting late into the night to infrequent riots. To be fair, few other parks in America have played such an important role in radical or anarchist history.

Many long-time residents complain of the neighborhood’s recent gentrification, and skyrocketing rents forced even legendary punk club CBGB's to exit the neighborhood, replaced by a John Varvatos boutique. And while there are truly many new restaurants and boutiques dotting Avenues A, B and C, lots of the famous watering holes, dives, and other unclassifiably scrappy bars remain. Some of our favorites include Mars on lower First Avenue, Zum Schneider on Avenue C, 2A on the corner of Second Street and Avenue A, and Lit Lounge, with its adjoining Fuse Gallery. Make sure to check out the Polish butcher stores on First Avenue and the nearby Italian pastry shops, walk along the Ukranian strip of Second Avenue, try one of the Japanese restaurants on East Ninth Street, and also walk along St. Marks Place, one of New York’s most eclectic streets.

The Nuyorican Poets Café is still going strong on East Third Street between Avenues B and C. Since 1973 its mission has been to create a multi-cultural venue that provides a stage for artists traditionally underrepresented in the mainstream media and culture. Poetry slams, theater performances, open jam sessions for hip-hop, poetry and jazz, as well as unique screenplay readings all take place on a weekly basis in this intimate cultural setting.

For film buffs, we would be remiss not to mention the Anthology Film Archives on East 2nd Street, a local theater best known for consistently showing the finest in avant-garde and experimental cinema. We also recommend the Landmark Sunshine Cinema on East Houston Street, home away from home for those who enjoy great acoustics and the company of die hard independent film fans.

The East Village is also home to the trendy Cooper Square Hotel as well as the charming Gem Hotel, making it a great neighborhood to enjoy your stay in New York.

Bathroom - Private bathroom, a hair dryer, and a shower/tub combination